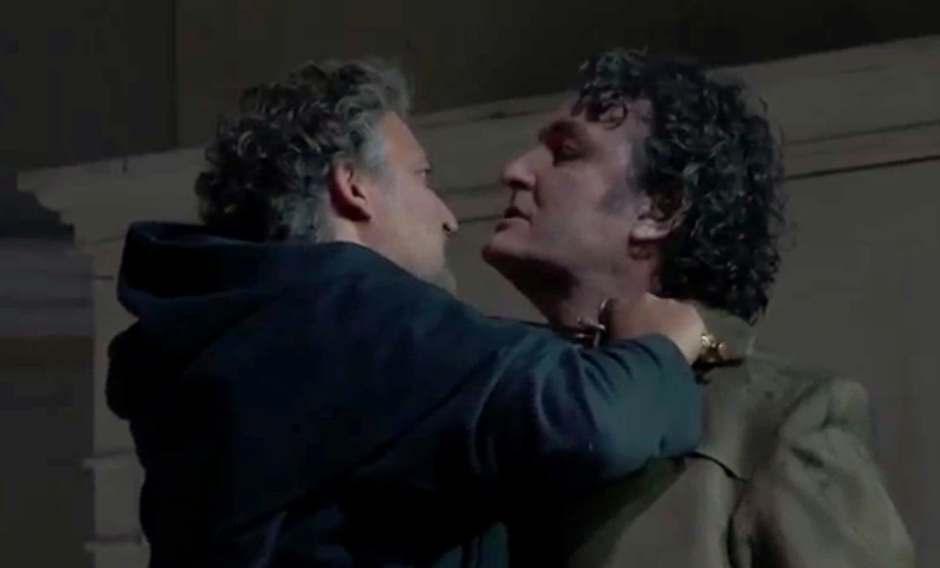 I couldn’t resist jotting some thoughts on my reaction to the recent and much-anticipated Royal Opera House production of La forza del destino, starring Jonas Kaufmann, Anna Netrebko, Ludovic Tézier, and Ferruccio Furlanetto, even though I’m not very familiar with this opera. When I first became infatuated with opera, I saw a recording of the Kaufmann/Harteros/Tézier version from Munich of several years ago, but that was the only complete version I’ve seen. I was intrigued, but a little confused by what seems a fairly simple story. Perhaps it was some directorial choices that made certain things unclear, whereas many who saw it were probably well familiar with the story from other versions and had no trouble following along.

In essence–SPOILER ALERT–the story begins in the home of the Marquis of Calatrava, who believes that his daughter Leonora has gotten over her infatuation with the foreigner, Don Alvaro (an Incan prince from the Americas). In reality, they’ve planned an elopement, and Don Alvaro shows up that very night, and overcomes the reluctance of Leonora to fulfill their plan. They are caught, however, by the Marquis, accompanied by the pursuing “destiny theme” in the music, and provoke a fight with Alvaro, who has tried to take the blame on himself. Alvaro, in trying to hand over his gun, accidentally shoots the Marquis—who, with his dying breath, curses his daughter. Both Leonora and Alvaro flee the same night, but not together; she believes he has escaped, perhaps gone back to his homeland. After overhearing her brother’s plan to find and kill his sister in order to avenge the family honor, Leonora begs Padre Guardiano to let her follow in the footsteps of another unhappy woman, and to commit herself to the life of a solitary anchoress in a cave near the friary. After some resistance, Guardiano agrees to support her. Meanwhile, after having sought Leonora for a year and now believing her dead, Alvaro joins the fight for Italy against the Germans. Rising in the ranks, he ends up—under another name—saving his foe, Don Carlo (who is also going by another name), and the two swear eternal brotherhood. Alvaro, having become mortally wounded, gives Carlo the key to a box that he keeps, revealing his identity, and asks Carlo to burn the contents. Carlo finds out the identity of Alvaro, and is eager that he should be healed–which is what happens–in order that he may kill him himself. Carlo reveals to Alvaro that Leonora is alive, but will die by his hand. After presumably both time and a game of cat-and-mouse searching have passed, Don Alvaro ends up committing his life to the friary in order to expiate the misdeeds of his past, and is much beloved by the populace. Finally, his whereabouts are discovered by Carlo, who provokes the dormant ire of the now-nonviolent Alvaro; they duel, ending up disturbing the peace of the nearby (dying) anchoress Leonora; Alvaro strikes a mortal blow at Carlo, and as the latter is dying Leonora and Alvaro recognize one another, and the dying Carlo, unrepentant still, kills his sister. During her final, peaceful passing, Alvaro finds in the situation and in her words assurance of his own redemption in spite of the brutal force of destiny.

In Charles Osborne’s book, The Complete Operas of Verdi, I was surprised to read that La forza, based on a play by Angel Saavedra and on a scene from Schiller, was first composed for a Russian audience and performed at St. Petersburg at the Imperial Theatre. The original ending was even more Russian, dark, and Dostoyevskian, coming directly from the play:

“Riva’s play ends, after the duel and the death of Leonora, with Alvaro’s suicide. He rushes to the cliff edge as the Father Superior and the monks appear on the scene. When the Father Superior calls him by his monastic name, Rafaele, he cries: ‘You can search for Father Raphael, you fool. I am a messenger from hell. I am the spirit of destruction….Hell, open your mouth and swallow me. Let the heavens collapse! Let mankind perish!’ And, with a final shout of ‘Extermination, Annihilation”, he flings himself over the cliff….The gentler ending as we know it today stems from the Milan revision of 1869” (Osborne 336).

Anna Netrebko’s low, melancholy soprano and the passionate but sadly tormented demeanor are a great fit for Leonora, and although Jonas is the only Don Alvaro I’ve seen, he fits the role beautifully with his winning charisma as well as his dark and dusky tenor voice and his phenomenal acting ability revealing the character’s guilt-ridden torment.

Ludovic Tézier is a brilliantly cold Don Carlo, whose rich baritone mingles so beautifully with Jonas in their scenes together; the two always have the most compelling chemistry. Theirs is the friendship that might-have-been; it is for me possibly the greatest tragedy in the story. The extent of Don Carlo’s need for revenge goes beyond any kind of bounds of honor; it becomes sheer passionate excess; but one sees, in the budding friendship before he realizes the identity of Alvaro, the potential that this character has. The gorgeous friendship duet, “Solenne in quest’ ora,” is breathtaking.

And Ferruccio Furlanetto’s Padre Guardiano is spot-on; the beauty of Furlanetto’s voice, so brilliantly preserved and rich, is always a sheer delight to listen to, and he plays the role with the appropriate complexity; he clearly admires Leonora but doesn’t know what to make of the whole situation. And, like a well-meaning but possibly quite misguided Friar Lawrence in Romeo and Juliet, allows her to persuade him to an extreme course of action. (His voice sometimes made me weepy just with the sheer beauty of it.)

I liked the simple staging and updated dress, whose time period was a little hard to pin down. The glimpse into Leonora’s childhood with an abusive brother, which we witness during the overture, makes an imaginative and helpful background for Carlo’s fanatical, Javert-like pursuit of his sister and her would-be lover. Thankfully, Christof Loy’s direction is neither overly-symbolic nor unnecessarily ambiguous; any interpretation that can be attached to it is something that one considers only in hindsight—at least, this was my experience—because the drama takes precedence. In Loy’s use of the background film projections of close-up, exaggerated reactions of the prinicpal characters, generally in slow-motion, I was reminded, as was my friend Viv whose review I would love to link here if I can find it on a public site, of the Warlikowski Don Carlos of Paris, 2017, though I don’t believe Loy’s was as creative and inspired as the latter overall. Another curious stage choice was that, whether in the Calatrava household or later in the friary, we seem to be in the same “setting”–a dining room of sorts—and I couldn’t help but wonder if the director wanted us to believe that Leonora was simply exchanging one kind of submission (that of a daughter to an overbearing father) for another (that of an anchoress to a religious father). I appreciated the “deeper logic” that the director was trying to get at in the staging, with the recurring room perhaps more reflective of Leonora’s consciousness and her tormented memories, than the real setting itself.

In terms of direction, the only thing I had a negative reaction to–because it took me “out” of the drama, as not entirely making sense except in terms of directorial imposition–was the scene where the friars are accepting their new “charge,” their new anchoress who will dwell in the cave, after Leonora has persuaded Padre Guardiano to allow her this chance. At a certain point, the mood of the scene changes from the somewhat daunting, somber and inspired piety of the action, to one where Leonora seems to have a last-minute change of mind, but the monks physically force her to stay and she ends up in a restraint position on the ground. Here again, I felt a little bit of the director’s imposition: the idea that she has merely exchanged one form of submission for another. To me, this undermines the strength of the love-sacrifice of the story, and the strength of Leonora’s character. After all, however misguided Padre Guardiano was in agreeing to it, it was her request and her resolve that won the day, and I think we need to respect that in the storyline, as it shows no little strength of character. We are dealing with people of a different time and different ideals, including those of the Romantic—often to the point of melodramatic—19th century stage here, and, in my opinion, the piece is more poignant if played straightforwardly and as though the characters are acting out of their authentic convictions, and not with our own 21st-century abhorrence for the extreme choices of cloistered, consecrated, or eremetic life, with the added submission to authority that is inherent in such a choice. So, while I see what the director was saying, it was, for me, a momentary misstep.

I do want to give a special mention to the fabulous supporting cast. In particular, for me, Alessandro Corbelli gave us some welcome comic relief with his wonderful Fra Melitone, and Robert Lloyd was both haunting and intimidating as the Marquis…such a key role and a key scene in the psychology of Leonora, and of her sad destiny. Veronica Simeoni did a fine job in the role of Preziosilla, though hers was overall, for me, not as strong a performance as the others. (This may be my own unfamiliarity with the opera and the character’s role in the drama, and having nothing to compare with.)

In terms of Pappano’s brilliant conducting and the beauty of the orchestration, nothing could be better. The thrilling final scenes, the Don Carlo/Alvaro duel, and the heartbreaking look on Jonas’ face which brought tears to my eyes—all made for a brilliant finale.

My next Forza, I think, will be the 1958 video recording with Corelli, Bastianini, Tebaldi, and Christoff…and very much looking forward to it!

But I also look forward to revisiting this one; I very recommend this production, which was a good vehicle for an excellent cast and orchestra of this strange and poignant opera.

4 thoughts on ““United in life and death”: Thoughts on the ROH’s haunting Forza”

Seamstress and support worker by day. Theology student (in hiatus), scribbler, bookworm, and opera nerd by night. Bookish and Dickensian. ♡

All Manner of Thing